The Rise of Techno-Socialism with Brett King: Part I

He has advised the Obama administration on the Future of Banking and one of his books, Augmented: Life in the Smart Lane, was shown on China’s President Xi Jinping’s bookshelf in his New Year’s Address to the Nation. Our guest Brett King is an outstanding futurist, author, speaker, radio show host and he is also the Founder and Executive Chairman of Moven Enterprise. Brett shared tremendous insights with us on a wide range of changes that will impact countries, industries and individuals in the decade of the 2020s and beyond - if you are interested in this topic, you are in for a real treat, read on!

We began by asking Brett about his early life and how he developed his ability to think so clearly about the future and articulate it so well. He said: “I always loved Sci Fi and technology. At the age of 13 I knew I wanted to be a technologist. I had a Commodore VIC 20 that I bought after saving up my pennies for a couple of years and taught myself to code. I ended up writing games for that platform and selling them, which didn't make a lot of money, but was clearly something I was passionate about from a young age. I remember watching Star Trek on a small black and white TV and one of my earliest memories is seeing the Apollo 14 moon landing on a black and white TV. I started reading voraciously at a young age and my favorite authors in the space include Arthur C. Clarke,  Stephen Baxter, David Brin, Greg Bear, Kim Stanley Robinson and my friend Kevin J. Anderson. I became a technology optimist, and this has been my underlying thesis in life, that technology can solve a lot of problems the world is facing.”

Brett continued: “I also became interested in the science, such as the underlying concepts in physics. Later on, I discovered I had a unique ability to bridge between the business and technology people, to be able to talk both languages. I could explain the impact of technology on business in a business-friendly way, and vice versa, which for deep technologists was not generally a common skill. I remember one of the companies I was working with put me on an aptitude assessment test, and a couple of weeks after the test I was called into the big bosses’ office and they said I had achieved an anomalous result from the testing organization’s perspective because I scored 100% on the logic and reasoning portion of the assessment, and they’d only seen this result one in 5 million times or something like that. As a result, they promoted me to be manager of the Support Division because they assessed this as a key skill. I was able to use these communication skills and logical reasoning capability early on to advance my career and saw it to be effective. As my career progressed, I wanted to be more of a communicator and storyteller. I saw that as technology adoption and disruption was speeding up, people were increasingly resistant to technology change from a psychological perspective even while the community at large was increasingly adopting these new technologies. The potential for disruption is even greater now because it's speeding up further and people are less prepared mentally to cope with the deleterious effects of technology. I wanted to explore these changes and how it was going to continue to impact society and how we need to change our thinking about the role technology has in the world to make the transition less jarring with issues like technology displacing workers, the Digital Divide, etc.”

We asked Brett his thoughts on how we can maintain our humanity and caring for each other as technology keeps progressing, with the example that in San Francisco and Silicon Valley today you find people in stunning self-driving Teslas and on the same streets there are people sleeping on the sidewalks. He said: “I'm actually writing about this now for my seventh book that will hopefully come out in July which I describe as The Rise of Techno-Socialism. I basically propose that we're getting to a point soon where things like homelessness simply won’t exist because the cost of mitigating the issue will be lower than the cost of leaving someone on the street. 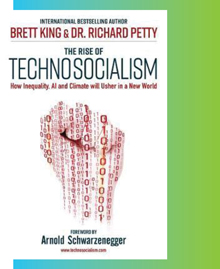 For example, we will reach a point where we can 3D print a small home or apartment for the cost of $3,000 or $4,000 in 24 hours, while the average cost to society of having a person be homeless in, say, San Francisco in terms of extended government services, policing and health care can average $35,000 to $45,000 a year. It's a false dichotomy to think that homeless people can solve the problem on their own if they want to. Statistics show that 97% of people also go unemployed after they're homeless because of the difficulties of getting a job, and society is now reaching a point where we have solutions to this based on technology. Universal healthcare is another example. It's been a debate in some parts of the Western World, and of course the United States is anomalous as the only developed country in the world without a universal health care system. With technologies such as gene technology and sensors monitoring our biometrics, biofeedback etc., and combining these with Artificial Intelligence, we will get much better at predicting health problems. Rather than waiting for you to first get sick and then give you drugs to treat the symptoms; we will start to really treat the underlying causes of disease. This will result in a dramatically lower cost of healthcare to the population in general. I predict we will reach the stage somewhere around 2030 or 2035 where the cost of resisting universal healthcare will be greater than just providing it based on the technologies available.”

We asked Brett how systems of education will also need to adapt: “If you look at education historically, it became more of a systemic pursuit or a government driven initiative around the middle of the 1800s coinciding with the Industrial Revolution. Most of this was initiated as a result of changing perceptions around child labor, particularly in Europe. When the mass education system or universal education system was created during the Industrial Revolution, it was ultimately designed to more efficiently create factory workers and people that would be compliant from a political and social perspective to learn the rules and cultures of society. The vision of education was much more production oriented rather than creativity oriented in terms of skill sets and learning. It’s not a particularly good system at teaching children to think, it doesn't teach people to learn over a life-time, it's more learn by rote, learn these rules, memorize this and that, and then you'll be able to function in society at a basic level. We need much more creative thinking and more adaptable skill sets for our children for future generations. Lifelong learning capabilities and the ability to innovate and adapt are essential skills that are not taught well in the school system today. If you go back to Europe in the Middle Ages, the wealthy would want to be apprenticed by a master to learn the skills of that master, so Da Vinci would take on his apprentices and they would learn at the feet of the master. I think there will be an element of this in the technology world we're moving into where if people are interested in a particular skill they can get together socially in communities and can learn through technologies like virtual reality and augmented reality. We will need some pretty radical changes in the way we teach children and the way people develop lifelong learning and absorb skills. If you look at Bill Gates, he's a voracious reader who reads all the time, and if you look at Elon Musk, he basically taught himself rocket science to a level where he was competitive with NASA scientists in a fairly short time. These are the types of skill sets and learning capability that I think will differentiate people and make them more adaptable to the rate of change we're going to see in society in the future.” 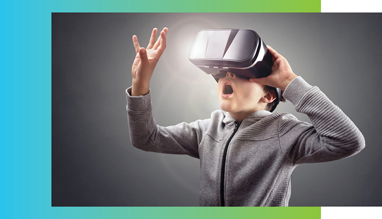 We asked Brett about the subjects he is currently following closely: “I'm really interested in new science discoveries like advancements in quantum computing, quantum entanglement and things like that. I try to think about the things we're developing today combined with the longer-term possibilities we're envisioning and see where its likely to take us in terms of future scenarios. I'm also interested in social cues, how the world is responding to these changes, and what impact it is likely to have on people's day to day lives. I read a lot of papers on sea-level rise and displacement of populations in coastal cities and possible mitigation factors we could employ. I’m interested in seeing how, as humanity, we don't have this ‘Tragedy of the Commons’ situation where inaction leads to massive potential problems like climate change. I think about questions like: How do we get people to collectively work to address some of these issues? What does it take to get people to act against their short-term self-interest to invest in the longer-term future of humanity?”

We asked Brett to further explain his thoughts on how we could actually overcome these ‘Tragedy of the Commons’ dilemmas such as climate change. We will share his response in Part 2 of this series, to be posted here on April 23.

Chat can help your travel business to better communicate with their clients, as well as enable customers to e…

How to Use WhatsApp to Make Your Sales Soar

Improve your company's leads, sales and overall brand visibility all through the world's most popular messagi…

Finance Solutions for your Customers and Bus…

What does it mean to be celebrating pride?

Pride is more than a spectrum of colors. Find out what celebrating Pride Month truly means, here.

Scheduling appointments, sending test results & prescription reminders are just 3 of the many benefits of cha…

Send Scam Alerts to Your Customers via Chat

Clickatell allows you to send scam & fraud alerts to your customers via SMS and WhatsApp, leading to higher r…